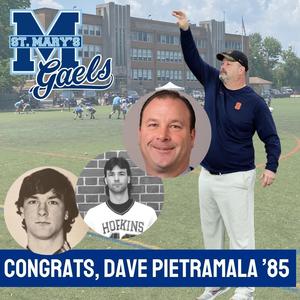 Founded at the University Club of Washington, DC, the Tewaaraton Award is recognized as the preeminent lacrosse award, annually honoring the top male and female college lacrosse player in the United States.
It’s not every day that an individual is honored as a legend and, much rarer, a Tewaaraton Legend. Since its inception, the recognition, compared to that of the elite Heisman Trophy in football, has been awarded to recipients who played college lacrosse before 2001, the first year in which the honor was presented.
The St. Mary’s High School community is pleased to join in this year’s celebration as Class of 1985 alumnus David Pietramala who began his career in lacrosse with the Gaels, is one of this year’s awardees.
In the eighties, Pietramala came to St. Mary’s from Hicksville as a young man, unaware of the full talents bestowed upon him as a student-athlete. Before he tried lacrosse, there was a love of basketball and baseball. The plot of the success story thickened as he honed his skills in lacrosse while attending school in Manhasset. As a Gael, he played among many great athletes he called friends, excelled in the sport, and helped lead the Varsity team to a CHSAA lacrosse title in 1985. After graduating, Dave went on to play defense for Johns Hopkins University. He was a leading team member that clinched the 1987 National Championship. A member of the U.S. Lacrosse Hall of Fame (2002), Dave is considered one of the greatest defensemen in the game’s history. According to the Johns Hopkins website, Pietramala is the only person to win a men’s lacrosse NCAA national championship as both a player and coach. In addition, he is the only person named both player and coach of the year. He achieved first-team All-American status three times while at Hopkins. He went on to play at the club level, followed by the professional, national, and international levels earning multiple recognitions with each team, including All-World titles twice.
His coaching career flourished after several positions, including University of Pennsylvania, Loyola College, and Johns Hopkins, before landing at Cornell as head coach in 1998. In 2001 he returned to his alma mater as head coach, where he remained for 20 years. He left the Blue Jays as the program’s all-time winningest coach (207-93). In 2021, Pietramala became the defensive coordinator for Syracuse University.
This year’s Tewaaraton Award Ceremony will be held at 7:30 PM on June 2, 2022, at the Smithsonian Institution National Museum of the American Indian in Washington, D.C. Pietramala and co-legend awardee for 2022, Kelly Amonte Hiller (Maryland), join over ten other legends awarded this honor in the game, including Manhasset’s Jim Brown. “Kelly is one of the greatest women’s players of all-time, and Dave is widely regarded as the best defensive player of all-time, so we’re incredibly proud to be able to honor these legends on the same night,” said Andy Phillips, President of the Tewaaraton Foundation. “Both have had an incredible impact on the game, and were revolutionary players on the field.”


Congratulations on this outstanding achievement, Dave. All of us at St. Mary’s, including the Office of Athletics, Lacrosse Head Coach (and your Blue Jays teammate) Matt Panetta, coaching staff and team, wish you continued success! We look forward to welcoming you back to campus for a visit soon! To make a donation to the St. Mary’s Gaels Athletic Program in Dave’s honor, please visit Support St. Mary’s Gaels Lax or call the Office of Development at 516-627-4605. For those who cannot attend the event in person, a livestream will be available at: tewaaraton.com/2022ceremony
Endorsed by the Mohawk Nation Council of Elders and U.S. Lacrosse, the Tewaaraton Award symbolizes lacrosse’s centuries-old roots in Native American heritage. The Tewaaraton Foundation ensures the integrity and advances the mission of this award. Each year, the Tewaaraton Award celebrates one of the six nations of the Haudenosaunee Confederacy – the Mohawk, Cayuga, Oneida, Onondaga, Seneca, and Tuscarora – and presents two scholarships to students of Native American descent. To learn more about The Tewaaraton Foundation, please visit www.tewaaraton.com.