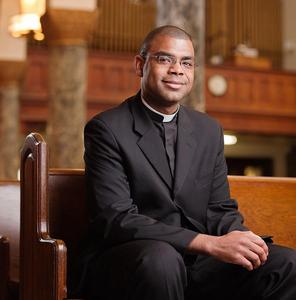 As our guest lecturer, Fr. Alonzo will present “Finding God through Our Brothers and Sisters - the Catholic Challenge to Racism.”

The Very Reverend Dom Elias Carr, Can. Reg., president of the Schools of Saint Mary, is pleased to announce that Reverend Father Alonzo Q. Cox will visit campus tomorrow, January 13, 2022. Fr. Alonzo is the coordinator of the African-American Apostolate and Ministry to African-American Catholics for the Diocese of Brooklyn and serves as the pastor of St. Martin DePorres Parish in Bedford-Stuyvesant, New York.


Father Alonzo Cox was born in the Fort Greene/Clinton Hill section of Brooklyn on March 22, 1983. He was raised in a loving home with his mom and dad, and three years later, his sister was born. His family were active parishioners of Queen of All Saints parish, where he became an altar server and, after his Confirmation, a lector and catechist. Fr. Alonzo attended the area public schools, P.S. 20, J.H.S. 117, and Metropolitan Corporate Academy in Downtown Brooklyn. Feeling called by God to serve as a priest, at the age of 18, after graduating from high school, Fr. Alonzo entered the minor seminary, Cathedral Seminary Residence, while attending St. John’s University. In June 2005, he graduated from St. John’s with a B.A. degree in Philosophy. Bishop Nicholas DiMarzio assigned him to continue his studies for the priesthood at the major seminary, the Seminary of the Immaculate Conception in Huntington, New York.


Fr. Alonzo spent his pastoral year of formation at the parish of St. Sebastian in Woodside, Queens. In May 2009, he received his M.A. in Theology and was ordained a transitional deacon on December 8, 2009. On June 26, 2010, Fr. Alonzo was ordained to the sacred priesthood at St. James Cathedral Basilica by Bishop DiMarzio. He was assigned to the parish of St. Clare, in Rosedale, Queens, as parochial vicar. In addition to his position as parochial vicar, Bishop DiMarzio appointed Father Alonzo to serve as the Diocesan Coordinator of the African American Apostolate and Ministry to African-American Catholics. In November 2014, Father Alonzo was appointed pastor of St. Martin DePorres parish, consisting of Our Lady of Victory, Holy Rosary, and St. Peter Claver churches in the Bedford-Stuyvesant section of Brooklyn.


Our faculty member, Reverend Mr. Rachid Murad, serves as a permanent deacon at St. Martin DePorres, where he works alongside Fr. Alonzo ministering to the parishioners and the community. We are excited to welcome Fr. Alonzo to St. Mary’s and eager to listen to his presentation on “Finding God through Our Brothers and Sisters - the Catholic Challenge to Racism.”