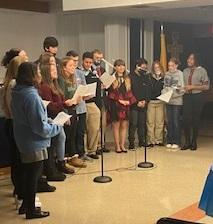 The Tri-M Honor Society hosted its first Coffee House (Open Mic) at St. Mary's. Written By: Dan Galea '23
Underneath the church preparations for an event were underway. President Joella Paccione of Tri-M Music Honors Society and Mrs. Wheeler, chair of the music department were making sure that everything was in place for Tri-M’s first event of the year. “I was confident in our members' ability but I felt nervous about the event working out as well as I had hoped it would be” remarked Ms. Paccione. At 4:00 pm the stage was set - all the performers had practiced, the baked goods were out and the coffee was hot and ready. It was a wonder that the
organizers could fit so much talent into one room.
As the sun started to set outside of the squinted windows of the Marian Room people started to pour in. An odd mix of students, parents, and teachers filled all the tables and packed the rest of the available space. The cookies went quick - and no one missed the opportunity to enjoy free coffee.
The night began with many wonderful renditions of popular and lesser-known songs alike, followed by a heartwarming duet by Felicity Sutton and Matthew Santos. The cheer in the air was palpable as more solos, duos, and trios performed their hard-practiced pieces. Special recognition is deserved by Julie Manfro, who performed a song of her own writing, Song for Christmas. A break from the singing was granted by Mia Chmela, who danced to the track of “Young and Free.”
As the night progressed the excitement in the crowd grew. During the performance of “Everything has changed” by Amber Collazo and Valerie Desrosiers the audience lit up their phones and swayed to the music. To everyone’s surprise, even the teachers gave in to the beat and swayed with the crowd. The feeling of Christmas crept in after the clock stuck 5. Hanna Koljenovic performed “Blue Christmas” and a trio of seniors Liam Mullooly and Carlos Castillo and Junior Kristen Casesa sang Jingle Bell Rock.
The night drew to a close, but the participants were not done wowing the crowd. Ella Kezys, Sienna Muccini, and Mia Chmela performed a rendition of “Count on Me.” About halfway through the song the audience spontaneously joined in. The coffeehouse ended with the entire senior population of Tri-M singing “Beautiful City.” The event left a very satisfied audience. “It was a great opportunity to meet new people and grasp the talent of the multiple performing arts students as a whole.” reacted Junior Balian Fagan. The Tri-M Society’s
government and members were pleased with the event’s outcome. “Our members have truly shown courage and leadership in their undertaking of this project. I'm so proud of them and for the support of the school community, because without either, this event would not have been nearly as successful.” commented Ms. Paccione. The coffeehouse was surely a success, and I for one cannot wait for more events like this in the future.