The Legend of Marist Hall 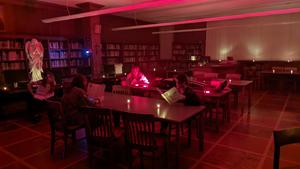 St. Mary's High School created a haunted experience for the middle schoolers.
Written By: Joella Paccione '22, Alexia Bevilacqua '22
Last Friday, October 29, our St. Mary’s theater students participated in the creation of a spooky
haunted house for the middle school and high school students. The event, organized by Mr.
Stalter, Mr. Sutherland, and Mr. Klement, brought chills and thrills to all who attended. Under
the direction of our Theatre Director, Mr. Brian Stalter, the students utilized their acting skills to
put on an interactive experience that left many frightened and quaking in their costumes.
The haunted house spanned three levels of Marist Hall and included students, faculty,
and administrators alike. Guests were led through the halls by Mr. Stalter, Mr. Ryan and Mr.
Klement, all of whom maintained a detached and cold demeanor while leading their tour groups.
Their stony expressions and apathetic countenance never faltered despite the nervous giggles of
their students. As a member of one of these tour groups, I was wholly impressed by the
unpredictable nature of the haunted house. My own emotionless tour guide led us from room to
room, pausing, and allowing the suspense to climb as we traveled throughout the hall. The eerie
red lights illuminating the corridors paired with the pitch darkness of other regions of the hall
contributed to an unnerving mood set by the actors. Tour groups witnessed thespians butchering
and serving a bloody dinner to their hall guests. Our stupor persisted with our viewing of actors
startling guests with their raucous bashing on the metal plating of the windows, causing a stir
from the previously quiet, albeit disconcerting, mood of the faculty room. We continued to travel
through the eerie darkness, our path leading into the guidance department, which was now
engulfed with a heavy fog. We debated the likelihood of a new scare waiting for us around the
corner. We were correct. Entering the library, the actors glared into our souls, their eyes never
leaving our faces as they tracked us across the room. They began to approach us just when my
group dashed out of the library and into the safety of the stairwell. However, our eyes connected
with that of a ghostly bagpipe player - Mr. Buckley - before we truly made it into that stairwell.
Advancing to the last floor, students were faced with a zombified Mr. DeMerit, who
transformed from a shadow in the dark recesses of the physics laboratory into a figure of the
Frankenstein monster attacking a student. I still wonder what happened to that helpless
freshman… We proceeded down the passage, where we heard screams on the lower floors,
amplifying our terror. Loud fists cracked against the classroom doors beside us, our unease
climbing to new heights as we saw the ghostly figure of a girl in a nightgown carrying a bell.
When we reached the end of the hallway, our tour guide paused, only for a brief moment, to let
us bask in the peculiar scene of the seemingly same person inhabiting the elevator with her back
turned away from us. Our tour concluded with our descent to the first floor, our minds
ceaselessly pouring over that which we witnessed on our journey through the haunted Marist
Hall.
The Haunting of Marist Hall is an experience I will not soon forget. From the intense
acting of the thespians to the participation of our faculty and administrators, the ordeal was a
night that will be aptly remembered as one of the most memorable events of the academic year.
A special thanks to all those who participated and made that night a true scare.