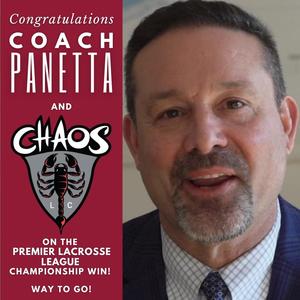 In his life off-campus, Coach Panetta is an assistant coach and serves as the offensive coordinator for the Chaos Lax Club, which defeated the Whipsnakes during the September 19 Premier Lacrosse League’s 2021 Championship game held in Washington, DC. Televised on NBC Sports, the game was a thrilling end to the season. According to the station’s highlight reel, “Chaos completed their Cinderella run to the 2021 Premier Lacrosse League crown, putting together a dominant performance on both sides of the field to dethrone the two-time defending champion Whipsnakes 14-9.”

The Premier Lacrosse League (PLL) is an American professional field lacrosse league. The league’s inaugural season debuted on June 1, 2019, and included a 14-week tour-based schedule in 12 major-market cities. Since entering the sports world, the PLL brings fast-paced action with the world’s top players, unprecedented access to the game for fans in the venue and at home, with a unique tour-based model to professional lacrosse. The Premier Lacrosse League (PLL) delivers what the lacrosse community has been seeking: a true home for the sport with the best players, a strong business model, significant financial support, national media coverage through an exclusive agreement with NBC Sports Group, and a unique touring structure that will better serve players and fans.

With Coach Matt Panetta’s storied history in the lacrosse world, being a part of this professional organization further demonstrates his love for the game. Coach Panetta’s passion for the sport includes his unique combination of playing and coaching at all levels, which has given him perspective and insight few people can match. A 3X All-American at Johns Hopkins University, All-Star and All-Pro honors with the NLL and MLL. Coach Panetta is also a member of the LI Metro Lacrosse Foundation Hall of Fame. His career at St. Mary’s spans 18 years as an English teacher while serving as director of summer programs, boy’s lacrosse camp coach, and head lacrosse coach for the boy’s varsity team.

Congratulations, Coach Panetta! We couldn’t be more proud to have you teaching in our classrooms and leading us on the field as our head coach at St. Mary’s. Your dedication to the students and your athletes is a testament to your faith in action. We wish you continued success and leadership in the game of lacrosse.