Diana-Abasi Archibong' '22: Reflection on the Impact of 9/11 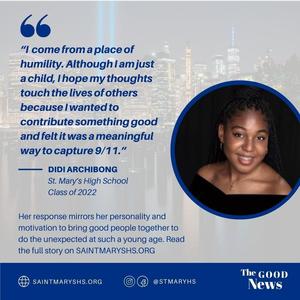 Diana (Didi) was not born yet on September 11, 2001, but is able to capture the impact the event has had on her generation.

The following reflection is written by Diana-Abasi Archibong, who is a senior at Saint Mary’s High School, Manhasset. Miss Archibong, known as “Didi,” was selected to represent the student body during a September 11 Prayer Service conducted at the school on Friday. Her words not only brought tears to the eyes of those standing before her but delivered hope into their hearts. Hope for continued resilience and healing from this fateful day, a day that Didi was not yet born to experience but grasped the opportunity to speak to the community and deliver a message wholeheartedly. She recounts, “after being selected by my theology teacher, I placed myself in a position where I would not just be writing about an event, but rather face the subject with raw emotion and breathe life into the piece.”


I want to thank the St. Mary’s Community for gathering here today on the 20th anniversary of this tragedy to remember the lives lost. I pray that my words resonate with you all.


There are four key points that can be learned from the disaster of September 11, 2001.


One. Disaster struck without warning, and left without grace. On September 11, 2001, a seemingly normal day quickly turned to horror. It went from being a sunny day in September, to a panic stricken nightmare. At 8:45 AM, a Boeing 767 slammed into the North Tower of the World Trade Center, leaving a gaping hole in its wake, and an explosion resulting in a cloud of fire, ash, and smoke. 18 minutes later, a second Boeing 767 appeared through the haze, and crashed into the South Tower. Burning debris rained down onto surrounding buildings and the streets below. Those who were not killed immediately by the plane, scrambled to evacuate the burning building. And then, the towers imploded. Like the bones of a steel giant breaking, the one hundred and ten story towers collapsed.


Two. Change followed without hesitation, and left an indelible mark. September 11 ushered in a new era of awareness about terrorism, and it informed us of the lengths our enemies will go to destroy us. The atrocities they would commit against us in the name of malevolence. We looked into the mouth of hatred, and were bitten by its teeth. This attack had been meticulously planned; some of the 19 terrorists had lived in the US for over a year, and had taken flying lessons at American commercial flight schools. Others entered the country a few months before September 11. All of them had easily smuggled knives and box-cutters past security at three east coast airports, revealing our inadequacies. We were wildly unprepared and vulnerable to these attacks. September 11 taught us the need for higher security, and demanded better protection against terrorists, people who would commit the unthinkable and kill themselves in the process of trying to break us. We listened immediately, and now have prime security and safety measures in our airports, major events, and more.


Three. Resilience resides in the hearts of all who bear witness, and thrives for generations. After the attacks, we leapt into action, and dove head first into the ashes. From those brave passengers in the sky to the unrelenting first responders on the ground, we refused to be crushed. First responders ranged from police, to firefighters, to benevolent civilians, who valued the lives of their fellow Americans so much that they ran towards danger, towards fire, towards ashes, and death, to save lives. Flight 93 is the perfect example of this; knowing that their “pilots” were actually hijackers, they sprang into action, mounting an insurrection against the terrorists. Together, the passengers and flight attendants fought the four hijackers, causing the plane to crash in a rural field in Pennsylvania. Both on and after September 11, first responders, our government, and the American people as a whole united to fight terror and rebuild their lives, working to create a peaceful future for our generation. The terrorists failed to inspire fear and cowardice. Instead they inspired strength, kindness, and bravery. For 20 years, those who have recounted the events of September 11, 2001, to the public, to their children, and their families, have instilled these important values. As we continue to remember these events, let these values of strength, kindness and bravery be spread forever more. Resilience, as upstanding and bright as the Freedom Tower, is found in the hearts of all those present for 9/11, and it will be reflected in future generations, like the pool that lies below. We are reminded to never forget those we’ve lost, and to never forget that our freedom is not free, and to always protect peace.


Four. Victory resides in the minds of those who find hope in the hopeless. Victory belongs to Americans, and to those who dare to dream and dream again, for we rise from the unsalvageable and build palaces from ruin. And as we face the future, it is peaceful and bright.


When asked what she would like people to take away from this reflection, Miss Archibong said, “I come from a place of humility. Although I am just a child, I hope my thoughts touch the lives of others because I wanted to contribute something good and felt it was a meaningful way to capture 9/11.” Her response mirrors her personality and motivation to bring good people together to do the unexpected at such a young age. DiDi is the founder and president of The Solution Project, a student-led nonprofit organization dedicated to educating youth on mental health issues and humanitarian crises, along with fundraising efforts to help solve these problems. To date, 30 students are working as a team at St. Mary’s High School to raise awareness and make an impact.


Miss Archibong is a product of Catholic elementary school education. Her student experience at St. Mary’s High School has opened her heart to deepen her faith and build lasting relationships with fellow students. Didi cherishes her time at the school and feels that her education choice presented her with opportunities that have molded her and “allowed me to be who I am today.” Miss Archibong has her sight set on attending Harvard University and becoming a psychiatrist.